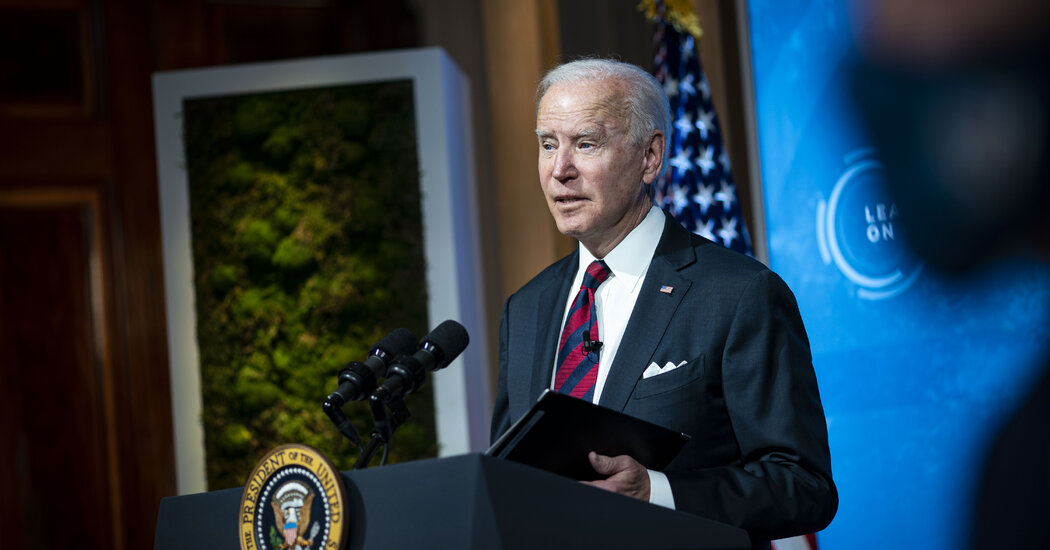 President Biden is expected to unveil a $1.5 trillion “human infrastructure” plan next week that will focus on education, child care and paid leave for workers, among other things. It would be paid for in part by new taxes on the rich, including the end of a tax break that lawmakers have tried to eliminate for years.

The White House will propose a major change to capital gains taxes, with people earning more than $1 million per year paying the top marginal tax rate on their investment gains. Mr. Biden wants to raise that rate to 39.6 percent.

The carried interest loophole might finally disappear. Profits earned from funds owned by real estate investors and managers of private equity and venture capital firms are taxed as capital gains at about 20 percent, instead of as regular income, which is taxed at more than double that rate when state levies and other taxes are taken into account.

Other changes to the tax code could be in the works, including to the estate tax. Private equity executives are also worried that the Biden administration may limit the tax deductibility of corporate interest payments, which would be another hit to their business model.

Stocks fell on news of the potential capital gains tax change, but futures are up today. Some in Washington believe any tax proposals will get watered down, particularly given Democrats’ slim margin of control in Congress. And the potential changes to the capital gains tax would affect only the 0.3 percent of Americans who reported annual incomes of $1 million or more, according to the latest IRS data.

U.S. health officials may soon lift the pause on Johnson & Johnson’s vaccine. A committee of outside experts will meet today to discuss whether to resume giving the shot; they’re expected to vote in favor. But the damage may be done: The Biden administration has reportedly written off the J&J shot’s importance to U.S. vaccination efforts.

President Biden sets a new climate goal. At the first day of a climate summit that the U.S. convened, he pledged to cut America’s emissions in half by 2030, compared with 2005 levels, and offered more funding for developing countries to help them meet their targets. Swiss Re estimated that climate change could cost the global economy as much as $23 trillion in the coming decades.

Airlines see clearer skies ahead. Carriers expect travel to return almost to normal levels by the summer, with the largest airlines expected to offer as many seats this July as they did in July 2019, by one estimate. The industry plans to call back thousands of employees and hire hundreds of pilots.

Scrutiny over a fatal Tesla crash intensifies. Two senators asked regulators to create recommendations for autonomous vehicle software, following the deaths of two men in a Tesla, in which police said no one was behind the wheel. Consumer Reports said it was able to trick Tesla’s Autopilot into operating without anyone in the driver’s seat.

AT&T gains ground in the streaming race. The company added 2.7 million subscribers to HBO and HBO Max in the first quarter. Also worth noting: AT&T collects nearly three times more revenue per streaming user than Disney, and trails only Netflix by that measure.

The riot at the Capitol in January prompted a reckoning on corporate political donations that will be a prominent feature of proxy season, with many shareholder proposals demanding greater disclosure of company spending.

“Companies are reading the writing on the wall,” Thomas DiNapoli, New York State’s comptroller and trustee for the state’s public pension fund, told DealBook. “Political and social polarization are bad for their business, and they need to decide if political donations are worth the risk.”

“Time will tell if their increased attention to these issues is lip service or if it represents a sincere change in corporate culture,” Mr. DiNapoli said. “At a minimum, investors need disclosure of this spending.” New York’s public pension fund is the third-largest in the U.S. and since 2010 it has filed more than 155 shareholder proposals on political spending, winning more than 40 adoptions or agreements, including from Bank of America, Delta Air Lines and Pepsi. Three of five resolutions it has advanced this year have already been withdrawn, with the companies agreeing to make changes without putting them to a vote. That’s a 60 percent hit rate, and companies that wouldn’t engage before are now at least responsive, a spokesperson for the fund said.

“Companies are now expected to have core values — almost personalities,” said Bruce Freed, the president of the Center for Political Accountability, a nonprofit that partners with shareholders on proposals. Recent agreements, like the ones brokered by Mr. DiNapoli, are a “strong indication” that corporations are feeling “real pressure,” he said. Nine of 30 companies (including those noted above) have agreed this year to provide more disclosure on political donations. Last year, eight of 40 companies facing similar proposals agreed to act instead of putting the question to shareholders in a vote. The Capitol riot “raised the stakes,” Mr. Freed said, and the pressure on companies has not relented since.

“We clearly misjudged how this deal would be viewed by the wider football community and how it might impact them in the future. We will learn from this.”

— A JPMorgan Chase spokesman, on the bank’s proposed financing of the European Super League. For more on the short-lived plan for a multibillion-dollar continental soccer competition, read this comprehensive account by The Times’s Tariq Panja and Rory Smith.

Tallying the damage of a global chip shortage

A dearth of computer chips is roiling supply chains around the world. It has especially wreaked havoc on carmakers, many of whom have been forced to shut down plants for lack of chips integral to modern cars.

The shortage is unlikely to end anytime soon, according to Intel’s C.E.O., Pat Gelsinger: “This will take a while until people can put more capacity in the ground,” he told The Wall Street Journal.

Some of the academic research that caught our eye this week, summarized in one sentence:

Percy Miller, better known to hip-hop fans as Master P, plans to invest $10 million in companies led by or serving people who are Black, Indigenous and people of color, DealBook is first to report. He sees ownership and equity as keys to bridging racial wealth gaps, and wants other investors to follow his lead.

“This is all about economic empowerment,” Mr. Miller told DealBook. Early in his career, Mr. Miller opened a record store from which he launched No Limit Records, once one of the largest independent labels. More recent projects have been aimed at social entrepreneurship, like an “Uncle P” line of food products to replace Aunt Jemima and Uncle Ben’s (both have since been renamed) that would dedicate a portion of profits to supporting Black communities.

Mr. Miller wants to invest in an array of industries, with education, including financial literacy, a priority. “I always tell people, product outweighs talent — at the same time, education and wisdom are so important,” he said. “That’s the longevity of my success.”