The world’s largest alternative asset manager Blackstone is advising its private equity portfolio of about 100 companies around the world to prepare for higher inflation and continued supply chain disruptions.

“We are talking to our companies now about having their supply chains closer to home, and keeping more inventory on-site,” Blackstone’s president Jonathan Gray told the Financial Times in an interview.

From port backlogs to semiconductor shortages and soaring commodity prices, bottlenecks threaten the global economic recovery and have seen consumer groups like Unilever, Nestlé and paint company Akzo Nobel increasing how much they charge their customers.

“Our expectation is that we will see higher levels of inflation,” said Gray, who is advising chief executives to budget for higher energy, food and labour costs. “This is going to stick with us.”

Gray’s comments come as Blackstone’s portfolios, which span buyouts to real estate, credit and infrastructure investments, continue to perform as the global economy reopens in the wake of the pandemic. The New York-based group on Thursday morning reported record profits and investment activity for the third quarter as assets under management hit a new record.

Blackstone’s distributable earnings per share, a metric favoured by analysts as a proxy of cash flow, more than doubled to $1.6bn from this time a year ago. Earnings were led by record management fee revenues and realised performance fees as Blackstone sold investments amid feverish capital market activity and buoyant valuations. 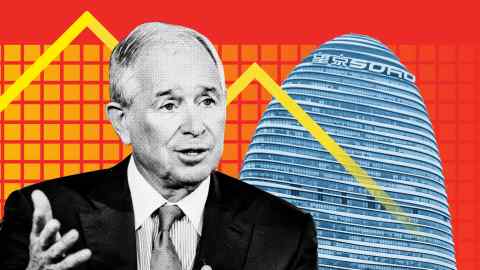 “Today, Blackstone reported the best results in our 36-year history,” chief executive Stephen Schwarzman said in a statement. “All of our key financial and capital metrics reached record or near-record levels.”

Blackstone generated $6.2bn in quarterly revenues and its distributable earnings per share were $1.28, up 112 per cent from this time last year. Its announced quarterly dividend of $1.09 a share was double that of the previous year.

The company experienced inflows of more than $500m a day, or $47bn in total for the quarter. As a result of such inflows, Blackstone ended the quarter with a record-sized war chest of $731bn — an increase of 25 per cent compared with the previous year.

The perpetual vehicles are allowing Blackstone to invest faster than ever, according to Gray. “The broadening of the investment platform has led to an increase in the velocity of investments,” he said.