Continuing our global look into the torrid pace of venture capital investment in the second quarter, today we turn to Canada. While many markets have posted impressive results, like the United States setting the pace for new all-time records in dollars invested into startups, Canada’s numbers stand out.

The country, now famous in the startup world for giving birth to Shopify, has already crushed prior yearly records for venture investment thus far in 2021. Indeed, CB Insights data indicates that Canadian startups this year have already raised more than double their 2020 totals.

The same data set indicates that Canada’s venture capital results now rival those of the entire Latin American region, with exits and megadeals coming in roughly on par in the second quarter, and a similar number of total venture capital rounds in the period.

That caught our attention.

Read it every morning on Extra Crunch or get The Exchange newsletter every Saturday.

The Exchange reached out to a number of venture capitalists to expand our perspective on the Canadian market beyond the data points. Matt Cohen, a Toronto-based investor at Ripple Ventures, told The Exchange that “Canada is in a venture explosion” today, leading to results that are “unprecedented” for the country.

Taking the data and investor notes in aggregate, Canada’s startup industry seems to be benefiting from both domestic and international trends, a wide genre focus and more than one hub. Let’s talk aboot it.

In the first half of 2021, Canadian startups raised $6.3 billion across 414 deals, per CB Insights data. Both numbers compare favorably to Canada’s 2020 results, when 617 deals led to $2.9 billion in total capital raised by Canadian startups. Canada has already bested its previous record in venture dollars invested ($4.3 billion, 2019), and is on pace to beat its all-time deal count as well (720, 2018).

By itself, the second quarter’s outsize results are even more extreme than its H1 2021 results might have led you to expect, amazingly. Observe the following chart from the same data set: 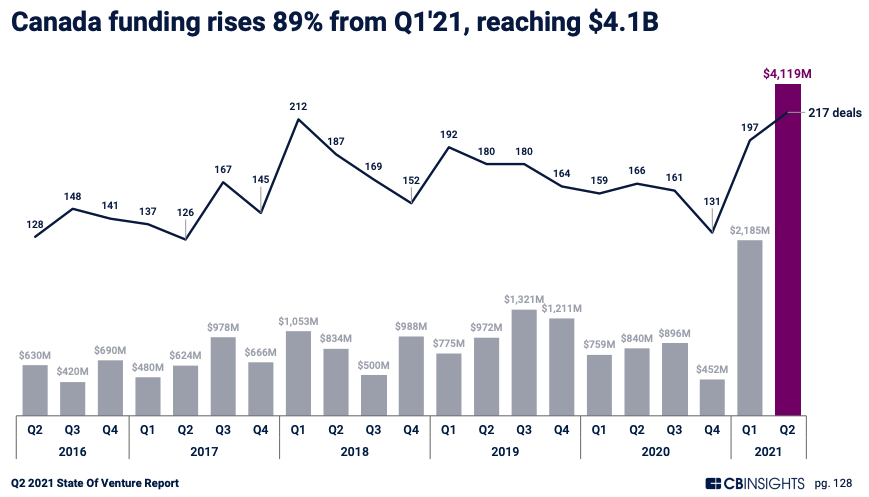 Canadian startups just had their single best quarter ever in both deal volume and dollar volume terms. Furthermore, the country boosted capital raised by nearly 10x from its local minimum in Q4 2020.

Notably, no Canadian startup deal in the quarter was worth more than $500 million; indeed, Trulioo’s $394 million Series D was the largest. From there the list includes $300 million for ApplyBoard’s Series D and Vena’s $242 million Series C. We read that list of results as indicative of an investing landscape in Canada that is not dominated by a handful of companies raising billion-dollar rounds. That’s good news, mind you: The data implies that the Canadian startup market is not being bolstered by one or two standout companies, but rather performing well more generally.