Sign up to myFT Daily Digest to be the first to know about Vectura Group PLC news.

Private equity group Carlyle has stepped back from a bidding war with Philip Morris International for UK inhaler maker Vectura after refusing to raise its offer.

New York-based Carlyle on Tuesday said its most recent offer of 155p a share was “full and fair” and final, meaning that a planned five-day auction overseen by the UK’s takeover regulator would be called off.

Carlyle also urged shareholders to back its bid, which is lower than PMI’s 165p-a-share offer, because of the potential impact on “wider stakeholders” of selling Vectura to a tobacco group.

PMI’s latest bid, which was made on Sunday, values Vectura’s equity at more than £1bn. It has said it wants to acquire the business in order to expand its presence in a market it calls “beyond nicotine”. Medical bodies and anti-smoking groups have opposed the deal.

Under rules set out by the Takeover Panel, which oversees UK mergers and acquisitions, PMI has until 5pm on Thursday to revise its offer.

The move put the onus back on Vectura’s board and shareholders to decide the company’s future. The board has backed offers from both companies at different points in a bidding war that has been running for weeks.

While it would be unusual for shareholders to back a lower bid, it is not impossible. Carlyle would have to persuade shareholders to give up the extra 10p a share for what it would present as ethical reasons or environmental, social and governance factors. 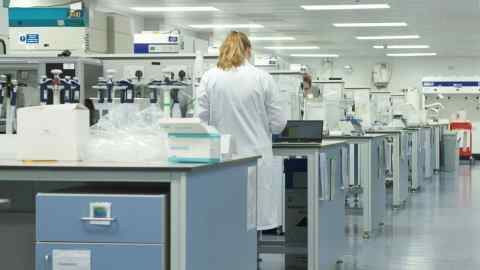 “In assessing the relative merits” of the rival offers, Carlyle “encourages shareholders to consider the broader context and the impact of each offer on the company and its wider stakeholders”, the private equity group said on Tuesday.

PMI has previously criticised the idea of private equity ownership, saying the buyouts industry was driven by “short-term gains”.

On Tuesday morning, PMI said it was switching its bid from a model that would need the support of 75 per cent of Vectura’s shareholders to one that could succeed with the backing of 50 per cent plus one share. The earlier model would have forced the remaining shareholders to sell their stakes once the 75 per cent threshold was reached.

Vectura did not immediately comment. The company’s shares fell to 163p in the wake of Carlyle’s announcement on Tuesday.

The Wiltshire-headquartered medical company is one of the few that sells complex inhaled therapies. Its biggest product is the Flutiform asthma inhaler.

The rush of private equity capital into UK-listed groups has become a hotly debated topic in Britain. Over the past six months, buyout groups have announced bids for UK-listed companies at the fastest pace in more than two decades.

Sign up here to receive Due Diligence, top stories from the world of corporate finance, sent straight to your inbox every Tuesday to Friday