Private equity group CVC Capital Partners has paid £250m for a majority stake in the UK holiday park operator Away Resorts in a bid to capitalise on the boom in domestic holidays.

Carl Castledine, Away Resorts’ founder and chief executive, said on Monday that CVC had moved quickly to take control of the company after the buyout firm Freshstream, its current owners, began to explore a sale.

“It’s only been a couple of weeks in reality,” Castledine added.

CVC has invested £250m in the business, roughly four times Freshstream’s investment in 2019, sources close to the negotiations said.

With restrictions on international travel out of the UK lasting far longer than many in the tourism sector had expected, domestic operators have enjoyed a surge in inquiries from holidaymakers seeking staycations. There has also been an increase in investor interest, particularly from private equity groups, as a result.

Demand has been so high for spaces across Away Resorts’ nine sites over the summer that Castledine said “we are going to be having something like 20 Easters back-to-back”, adding that this year would be “well over 2019 in terms of demand”. The company, which was founded in 2008, had not needed to discount to tempt consumers either, meaning that prices remained high, he said.

CVC, which recently agreed to take a stake in the Six Nations rugby tournament and is in talks to create a worldwide tennis group, said that Away Resorts was “well positioned in a fragmented and growing market that benefits from strong consumer tailwinds”.

In January, Butlin’s owner Bourne Leisure was bought by the US private equity giant Blackstone in a deal valuing the company at roughly £3bn. Two other UK holiday park operators, Park Holidays and Verdant Leisure, have also been put up for sale, according to Sky News.

The UK government has restricted international travel because of a rise in the Delta variant of Covid-19, forcing British holidaymakers to look for breaks closer to home. Only 11 countries are deemed safe for UK travellers to visit without having to quarantine, although none are major holiday destinations. 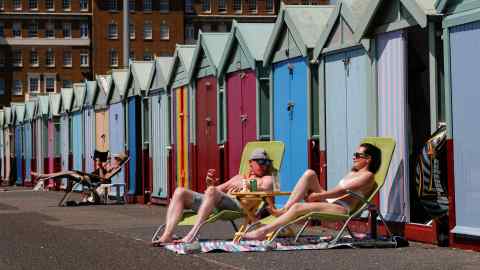 Caravan trader Robinsons Caravans said on Monday that there had been a “dramatic increase” in consumers buying caravans for the first time, with sales up almost 50 per cent in the year to date compared with the same period in 2020.

Jarrod Clay, Robinsons’ managing director, said that it was a “record year” for the company and that it was “seeing a huge increase in people aged under 40 buying their first caravans”, with many spending upwards of £30,000.

Castledine said that Away Resorts, which has bought three additional parks since the end of last year, was struggling to build enough holiday lets to meet demand amid staffing shortfalls and rises in the prices of raw materials such as galvanised steel and concrete.

Its park in St Ives, Cornwall, is almost fully booked for the rest of the year, although Castledine said that there were still spaces midweek at its other parks in the coming months.

Rothschild & Co advised Freshstream on the sale, which is expected to complete later in the year.