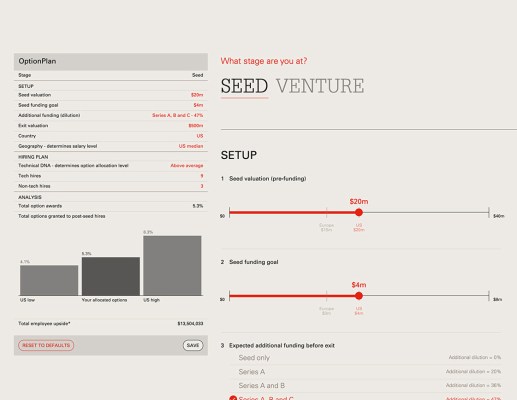 The ability to offer stock options is utterly essential to startups. They convince talented people to join when the startup is unlikely to be capable of matching the high salaries that larger, established tech firms can offer.

However, it’s a complex business developing a competitive stock option plan. Luckily, London-based VC Index Ventures today launches both a handy web app to calculate all this, plus new research into how startups are compensating their key hires across Europe and the U.S.

OptionPlan Seed is a web app for seed-stage founders designing ESOPs (Employee Stock Ownership Plans). The web app is based on Index’s analysis of seed-stage option grants, drawing on data from more than 1,000 startups.

The web app covers a variety of roles; six different levels of allocation benchmarks; calculates potential financial upside for each team member (including tax); and adjusts according to policy frameworks in the U.S., Canada, Israel, Australia and 20 European countries.

It also builds on the OptionPlan for Series A companies that Index launched a few years ago.

That said, Index found stock option grant sizes are increasing, particularly among startups “with a lot of technical DNA, and weighted towards the Bay Area”. In less tech-heavy sectors such as e-commerce or content, grant sizes have not shifted much. Meanwhile, grants are still larger overall as seed valuations have grown in the last few years.

Index found the ESOP size is increasing at seed stage, following a faster rate of hiring and larger grants per employee. Index recommends an ESOP size at seed stage is set at 12.5% or 15%, rather than the more traditional 10% in order to retain and attract staff.

Additionally, salaries at seed have “risen dramatically”, with average salaries rising in excess of 60%. Senior tech roles at seed-stage startups in the U.S. now earn an average $185,000 salary, a 68% increase over three years, and can rise to over $220,000. But in Europe, the biggest salary increases have been for junior roles, both technical and nontechnical.

That said, Index found that “Europe’s technical talent continues to have a compensation gap” with seed-stage technical employees in Europe still being paid 40-50% less on average than their U.S. counterparts. Indeed, Index found this gap had actually widened since 2018, “despite a narrowing of the gap for nontechnical roles”.

Index also found variations in salaries across Europe are “much wider than the U.S.”, reflecting high-cost hubs like London, versus lower-cost cities like Bucharest or Warsaw.

The war for talent is now global, with the compensation gap for technical hires narrowing to 20-25% compared to the U.S.

Index’s conclusion is that “ambitious seed founders in Europe should raise the bar in terms of who they hire, particularly in technical roles”, as well as aim for more experienced and higher-caliber candidates, with larger fundraises to be competitive on salaries.