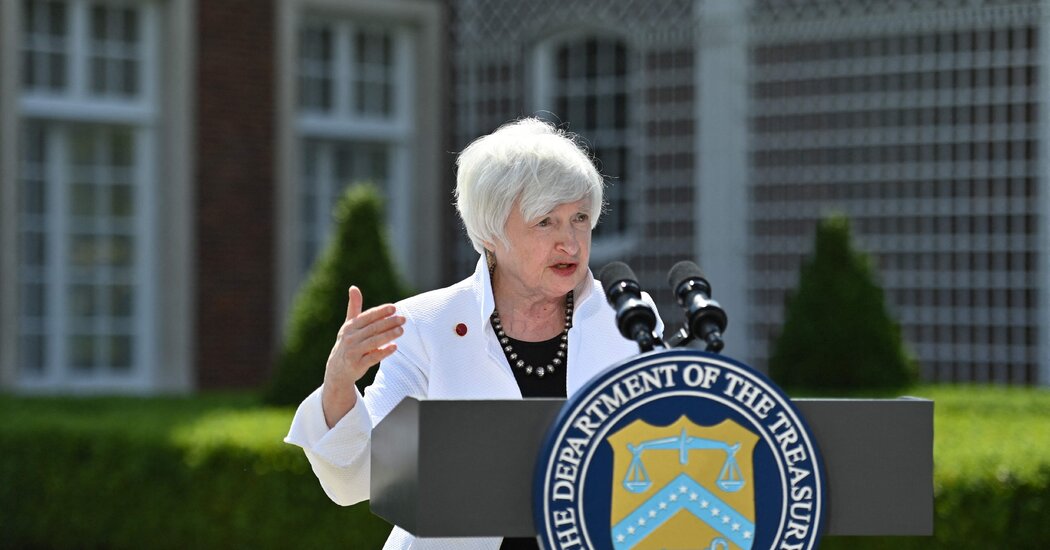 End of the beginning on a global tax deal

The Group of 7 finance chiefs sealed what they called a “historic global tax agreement” at a summit meeting in Britain this weekend. It was a diplomatic victory in particular for Treasury Secretary Janet Yellen, who is leading the Biden administration’s push to collect trillions more in taxes from corporations and wealthy Americans to pay for its expansive spending proposals.

There are two “pillars” to the deal. The first would tax companies based on where they operate, and not just the location of their headquarters. This is important for big European countries, which have sparked trade tensions by imposing special digital taxes on American tech giants. The second would impose a 15 percent minimum global tax rate on companies — a major priority for the U.S. — which would generate more revenue from taxes on American multinationals that use offshore havens to reduce their tax bills.

There are many details left to be worked out. The location-based tax pillar would apply to companies with at least a 10 percent profit margin, which some say wouldn’t cover Amazon. The global minimum rate pillar would be most effective if applied to corporate profits broken down on a country-by-country basis, instead of pooled and averaged across different tax regimes.

What happens next: The proposal will go before the Group of 20, which meets in Italy next month, and then an O.E.C.D.-led group of around 140 countries negotiating tax policy. National governments would have to pass legislation to enact any changes to their tax laws, which means it could take years before this weekend’s agreement has a real-world impact.

Jeff Bezos is headed to space. The Amazon founder announced this morning that he will join a July 20 manned space flight by his rocket company, Blue Origin, along with his brother. Coming two weeks after he steps down as Amazon’s C.E.O., it would make him the first billionaire space entrepreneur to reach space, beating Richard Branson and Elon Musk. It also raises questions about the risks to Amazon, with its founder, executive chairman and major shareholder strapped into a capsule rocketing 60 miles above Earth.

AMC executives cash in on meme-stock mania. Leaders of the movie theater chain sold $8 million worth of shares late last week as the company’s stock soared. In other meme-stock news, GameStop’s most ardent fans think the video game retailer has a bright future ahead, despite its volatile trading performance.

U.S. vaccination rates continue to drop. America is now averaging fewer than one million shots per day, even though everyone 12 and older is eligible. That is putting Biden’s goal of 70 percent of adults being vaccinated by July 4 increasingly out of reach. (Separately, here’s a creative effort by The Washington Post to track progress toward that goal.)

The global semiconductor shortage may last longer than expected. Flex, one of the world’s biggest chip makers, warned that the short supply — which has disrupted industries like automaking and consumer electronics — may persist until next summer. That could speed up efforts by countries and companies to rethink their supply chains.

Apple employees push back against the company’s hybrid-working plans. Workers wrote in a letter to management that a mandate to work three days a week in the office is too inflexible.

Back to the future for buyouts

A group of investors, including Blackstone and Carlyle, have agreed to buy the medical supplies provider Medline for more than $30 billion. It’s the biggest leveraged buyout since the 2008 financial crisis — and a sign that private equity firms are ready to open their wallets for more (and bigger) deals.

Buyout firms are now sitting on $1.6 trillion in so-called dry powder, according to Preqin, and have also continued fund-raising at a healthy pace. That has filled their war chests with cash that they’re increasingly under pressure to spend — or risk the ire of investors who don’t want their money just sitting around. And as The Wall Street Journal notes, some of those investors also want to invest directly in those deals alongside the private equity firms.

That has led to a revival of pre-crisis strategies. Beyond the growing size of L.B.O.s, private equity shops are teaming up to buy targets, a practice that had fallen out of favor (and ran into concerns about potential antitrust violations). That said, the Medline megadeal isn’t exactly like the club deals of before: It involves less debt than previous buyouts, and the private equity buyers are keeping the current management.

“I’m here to tell all the haters and all the doubters that this is not a moment, this is a movement.”

— Francis Suarez, the mayor of Miami, at the city’s huge Bitcoin conference this weekend. Tens of thousands flocked to the city for the event, a “raging fireball of finance, technology and joyful anarchy, of unfathomable wealth and desperate striving,” writes The Times’s Erin Griffith, who had a photographer in tow to capture the mood among crypto’s most ardent supporters.

Dave, the banking app, is going public via a SPAC that values the company at about $4 billion. The deal, with VPC Impact Acquisition Holdings III, includes a $210 million investment led by Tiger Global Management. Mark Cuban is a lead investor and board member at Dave, which has about $122 million in annual revenue and has been profitable since 2018.

Dave is one of many fintech upstarts taking aim at overdraft fees. Those fees, which tend to hit those who can least afford them, have also attracted the ire of regulators. Dave says that unlike others tackling overdraft fees by cutting off spending when an account drops to zero, it offers up to $100 in no-interest cash so customers can still pay for daily essentials. Dave collects revenue through $1 monthly membership fees and the tips it asks members to pay, instead of charging them interest. It also has a “side hustle” service in which customers can apply for gig economy jobs at companies like Uber to make money in advance of upcoming bills.

“It is challenging out there right now,” Jason Wilk, Dave’s chief executive, said of the SPAC landscape. But the blank-check firm run by Victory Park Capital gave Dave the chance to go public quicker than with a traditional I.P.O., he said. The extra investments by Victory Park and Tiger Global also helped. “If we didn’t have the $30 million support from Victory Park and another $150 million from Tiger ahead of going through with the transaction, I don’t know that we would have chosen the SPAC route right now,” he said.