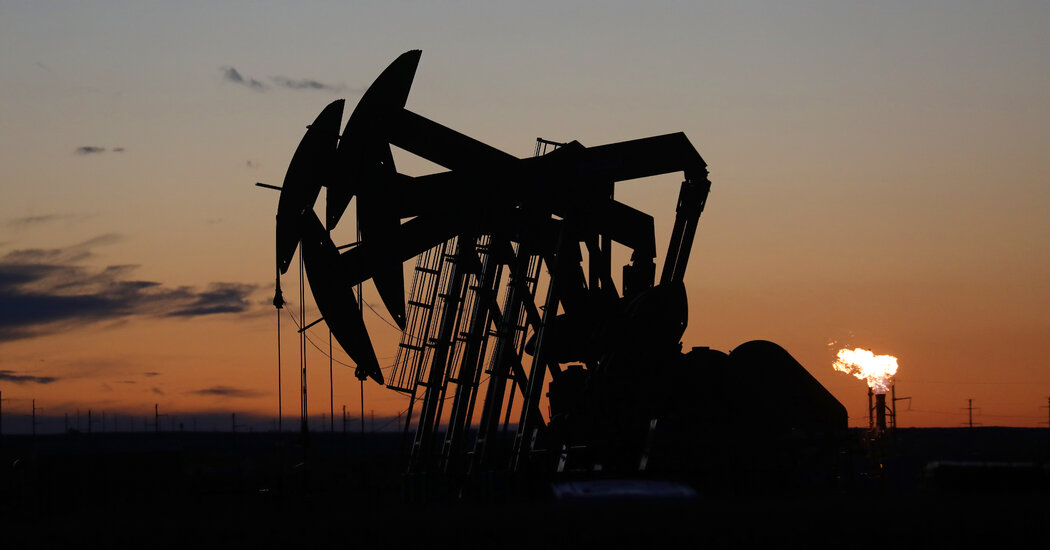 As the oil and gas industry faces upheaval amid global price gyrations and catastrophic climate change, private equity firms — a class of investors with a hyper focus on maximizing profits — have stepped into the fray.

Since 2010, the private equity industry has invested at least $1.1 trillion into the energy sector — double the combined market value of three of the world’s largest energy companies, Exxon, Chevron and Royal Dutch Shell — according to new research. The overwhelming majority of those investments was in fossil fuels, according to data from Pitchbook, a company that tracks investment, and a new analysis by the Private Equity Stakeholder Project, a nonprofit that pushes for more disclosure about private equity deals.

Only about 12 percent of investment in the energy sector by private equity firms went into renewable power, like solar or wind, since 2010, though those investments have grown at a faster rate, according to Pitchbook data.

Private equity investors are taking advantage of an oil industry facing heat from environmental groups, courts, and even their own shareholders to start shifting away from fossil fuels, the major force behind climate change. As a result, many oil companies have begun shedding some of their dirtiest assets, which have often ended up in the hands of private equity-backed firms.

By bottom-fishing for bargain prices — looking to pick up riskier, less desirable assets on the cheap — the buyers are keeping some of the most polluting wells, coal-burning plants and other inefficient properties in operation. That keeps greenhouse gases pumping into the atmosphere.

At the same time banks, facing their own pressure to cut back on fossil fuel investments, have started to pull back from financing the industry, elevating the role of private equity.

The fossil fuel investments have come at a time when climate experts, as well as the world’s most influential energy organization, the International Energy Agency, say that nations need to more aggressively move away from burning fossil fuels, said Alyssa Giachino of the Private Equity Stakeholder Project.

“You see oil majors feeling the heat,” she said. “But private equity is quietly picking up the dregs, perpetuating operations of the least desirable assets.”

In its report, the Private Equity Stakeholder Project examined the energy investments made by the top 10 private equity firms since 2010, including giants Blackstone, KKR and Carlyle. The report found that about 80 percent of current holdings are in oil, gas and coal. That was despite many of those firms touting their sustainable investments.

Private equity firms have emerged as an increasingly powerful, yet secretive, investment force in recent decades. They typically assemble vast pools of money from wealthy or institutional investors in order to invest directly in companies, often those in distress and unable to raise capital in more traditional ways. Because the firms are required to disclose relatively limited information, it can be difficult to get a full view of their holdings or their climate or environmental practices.

Drew Maloney, president and chief executive of the American Investment Council, a trade group that represents private equity, said the industry was “playing an important role in the energy transition and investing more each year in renewable energy projects.” In 2020, private equity had funded over half of all private renewable energy projects across America, he said.

“This significant investment is delivering more jobs and cleaner energy for the future,” Mr. Maloney said.

The private equity industry, which manages $7.4 trillion in global assets, now plays a major role in a wide swath of American life, from firefighting services to nursing homes, often financing its deals with debt while generating profits for its clients and fees for its managers. Clients include public pension funds, which now on average allocate about 20 percent of their investments in private equity.

In the fossil fuel industry, one effect of sales to private equity investors is to transfer those assets, and their emissions and other environmental hazards, further from the public eye. Though all companies, public or private, must follow environmental regulations, private firms are exempt from many public financial disclosure rules. As a result, some of the country’s largest emitters of methane, a particularly potent planet-warming gas, are oil and gas producers backed by relatively little-known investment firms.

In 2017, Hilcorp, a private company backed by the private equity giant Carlyle, bought oil major ConocoPhillips’ San Juan Basin assets in Colorado and New Mexico for $3 billion, and last year bought all of BP’s Alaska operations and interest for $5.6 billion. Hilcorp is now the country’s largest known emitter of methane, reporting almost 50 percent more emissions from its operations than the nation’s largest fossil fuel producer, Exxon Mobil, despite only producing about a third of Exxon’s oil and gas volume.

David McNeil, head of climate risk at Fitch Ratings, wrote in a memo earlier this year that there is a growing trend among publicly traded companies and investors to divest from fossil-fuel or other holdings that contribute to climate change, but “comparatively little focus is on who purchases these assets,” and private equity firms, in particular, “will generally have fewer incentives to reduce emissions than their public counterparts.”

At the height of the pandemic, dozens of private equity-backed oil and gas producers filed for bankruptcy, raising concerns that they would use the restructuring process to evade cleanup rules. Now, as oil and gas prices surge again, private shale drilling and fracking are leading a rebound in oil and gas drilling.

There are some signs of change.

And paradoxically, rising oil and gas prices may help renewable energy become even more competitive with fossil fuel projects, because an increase in electricity prices could help bolster demand for new wind or solar projects among utilities and others looking to protect themselves from wild swings in the market.

Ayako Yasuda, professor of finance at the Graduate School of Management at the University of California, Davis, said private equity was “very incentivized to maximize what its clients want.” If clients pushed funds to find profits in environmentally responsible investments, “I don’t think they’d have a problem doing that.”

Kate Holderness, a spokeswoman for Blackstone, said that virtually none of the firm’s capital over the past three years was in oil exploration or production. while nearly $11 billon was committed to clean energy projects. The company is aiming to reduce its emissions by 15 percent across all new investments where it controls energy use, she said.

Weak disclosure rules means it’s difficult to verify environmental claims across the private equity industry. Blackstone has come under criticism over deals like its acquisition of a project to build a new oil pipeline and export terminal in Louisiana that would emit more than 500,000 tons of greenhouse gases per year. Ms. Holderness said the pipeline would be fitted with real-time emissions detection and monitoring technology.

Groups like the Private Equity Stakeholder Project have called on the Securities and Exchange Commission to compel private equity firms to fully disclose details of their fossil fuel holdings. The American Investment Council, the trade group, has opposed such a move, saying current requirements were adequate, particularly since the private-equity industry serves relatively sophisticated investors — pension funds or others with immense amounts of money to invest, and the wherewithal to do their own research.