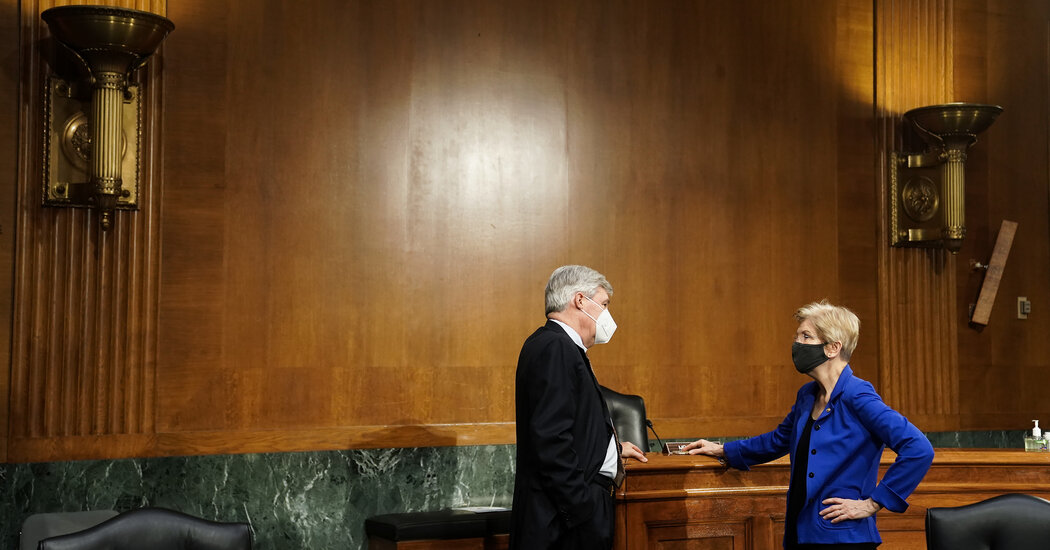 It’s a basic rule of banking in the United States. Without it, the American financial system is at risk of being an unwitting participant in crimes ranging from money laundering to the funding of terrorism.

But the imposition of economic sanctions on Russian oligarchs over the invasion of Ukraine has exposed a loophole that prevents regulators from tracking the flow of offshore money into the United States: Hedge funds, private equity firms, family offices and venture capital firms don’t always know whose money they’re taking.

Now, some lawmakers on Capitol Hill are joining the calls for the Securities and Exchange Commission and the Treasury Department to require firms in the $11 trillion private funds market to do the same kind of checks performed by financial institutions including banks, brokerages, mutual funds and even casinos.

In a joint letter on Tuesday to Janet L. Yellen, the Treasury secretary, and Gary Gensler, the S.E.C. chairman, Senators Elizabeth Warren of Massachusetts and Sheldon Whitehouse of Rhode Island said closing the loophole would “help the U.S. government track down the hidden wealth of sanctioned Russian elites and better combat money laundering, terrorism, the proliferation of weapons of mass destruction and other criminal activity throughout our financial system.”

The two Democrats cited a report by The New York Times last week about the deeply complex financial holdings of one oligarch, Roman Abramovich, who has invested billions of dollars through private funds. (Mr. Abramovich has been the subject of sanctions by the British authorities but not those in the United States.)

“The status quo is plainly untenable,” the senators wrote.

A spokesman for the Treasury Department declined to comment on the lawmakers’ letter. The S.E.C. did not immediately comment.

“Right now, broker-dealers, mutual funds and banks are legally required to understand who their clients are and evaluate the source of their clients’ funds before investing them,” said Elise Bean, former staff director and chief counsel of the Senate Permanent Subcommittee on Investigations, who has specialized in money-laundering investigations. “But hedge funds, private equity and venture capital funds don’t — which doesn’t make any sense.”

Ms. Bean is advising a coalition of more than 100 organizations that filed a comment letter with the S.E.C. last week, saying regulators should require private funds to provide regulators with a list of all the “beneficial owners” of the money they accept from investors and to identify the countries where those investors reside.

The groups, calling themselves the Financial Accountability and Corporate Transparency Coalition, said private funds needed to be required to make those disclosures to help regulators track the potential “presence of illicit financial flows in private markets.” Russia’s invasion of Ukraine, they said, demonstrated the challenges of keeping tabs on money from political insiders who made investments shrouded in secrecy when they were not subject to government sanctions.

An S.E.C. spokeswoman said the commission “benefits from robust engagement from the public” but generally does not respond publicly to comment letters.

There are a number of competing ideas to bring private funds and unregulated investment advisers up to the same know-your-customer standards as banks.

Ms. Warren and Mr. Whitehouse suggested in their letter that the Treasury could interpret additional powers given to financial regulators in the aftermath of the Sept. 11 terror attacks as covering private funds.

Some supporters of increased oversight say the Investment Advisers Act gives the S.E.C. the authority to require private funds to conduct know-your-customer checks.

Another possibility is to expand the 50-year-old Bank Secrecy Act, which requires banks and other regulated financial institutions to carefully vet their customers and stop potential money laundering.

The Enablers Act, introduced in the House of Representatives last fall, would extend those rules to investment advisers at private funds and others.

“It is not a bad thing to understand who you are taking money from,” said Daniel Tannebaum, an expert on financial crimes at the consulting firm Oliver Wyman.

But the fate of the Enablers Act is uncertain. A comparable bill has yet to be introduced in the Senate, and no committee has agreed to consider it in the House. The scope of the legislation could also pose a problem: Lawyers, public relations firms and art dealers would also be required to make the same checks, and the inclusion of so many professions increases the likelihood of opposition.

The holdings of rich and powerful Russians have come under intense scrutiny after the United States and other Western nations targeted their ability to conduct business after the invasion of Ukraine. Private funds in the United States are required to inform the Treasury if they hold assets belonging to Russians on the sanctions list, but they are not required to provide that information to other investors.

And oligarchs’ finances are deeply complex, which can obscure their role as the source of the money: The Times reported that Mr. Abramovich had invested several billion dollars in U.S. hedge funds and private equity funds through a variety of shell companies. In some cases, participants weren’t even aware of whose money they were helping to manage.

Much of Mr. Abramovich’s investing activity was facilitated by a small firm, Concord Management, based in suburban Tarrytown, N.Y. Concord Management previously said it recommended investments but did not directly manage any money. Representatives for Mr. Abramovich in London did not immediately respond to messages seeking comment.

The Russia-Ukraine War and the Global Economy

Shortages of essential metals. The price of palladium, used in automotive exhaust systems and mobile phones, has been soaring amid fears that Russia, the world’s largest exporter of the metal, could be cut off from global markets. The price of nickel, another key Russian export, has also been rising.

Financial turmoil. Global banks are bracing for the effects of sanctions intended to restrict Russia’s access to foreign capital and limit its ability to process payments in dollars, euros and other currencies crucial for trade. Banks are also on alert for retaliatory cyberattacks by Russia.

In another example, Fort Ross Ventures, a California venture capital firm, has taken in investment dollars from Sberbank, a Russian state-owned bank. The U.S. and British governments have both imposed sanctions on Sberbank.

Ross Ventures said in a statement that it was “analyzing all international sanctions announced against Russia and Sberbank and will act in compliance with the applicable law.”

The proposals from Ms. Warren and Mr. Whitehouse as well as the FACT coalition involve revisions to a private fund disclosure requirement called Form PF — enacted in the wake of the financial crisis of more than a decade ago — that the S.E.C. is already considering revising.

The S.E.C. has proposed requiring hedge funds, private equity firms and other investment advisers that must file a Form PF to provide regulators with updates on “extraordinary investment losses” or large exposures to other investors that could have an impact on markets.

The FACT coalition has said the existence of money from questionable sources in private funds is also potentially destabilizing to the financial system, which is why regulators need to have access to real-time information about those investors.

Representatives for the professional associations that represent the hedge fund and private equity industry said placing further reporting and know-your-customer demands on private funds was largely unnecessary because neither industry had historically been a magnet for money laundering.

The associations note that even if a private fund manager in the United States is not doing its own background checks, many funds employ independent firms to administer their offshore investment vehicles to perform know-your-customer and anti-money-laundering checks on foreign investors.

Bryan Corbett, chief executive officer for the Managed Funds Association, which represents more than 140 hedge funds and other investment funds, said private funds already “work with banks and specialized administrators and conduct standardized, rigorous due diligence on those investing in funds.”

In the case of offshore funds, many outside administrators are based in the Cayman Islands, which heed sanction orders by both the United States and Britain. When the British government imposed sanctions on Mr. Abramovich, many administrators moved to freeze funds in entities that could be tied to him.

Shortly before the sanctions orders were imposed, representatives for Mr. Abramovich sought to restructure some of the entities that invested in those funds, three people briefed on the matter said. But those maneuvers did not succeed in avoiding the sanctions orders, according to the people, who spoke on the condition of anonymity because they were not authorized to comment publicly on the matter.

But critics have said the checks are not foolproof because many wealthy offshore investors like Mr. Abramovich have relied on shell companies to mask their ownership, and private fund managers are often not aware of who the beneficial owner of a shell company is.

“It is clear that substantial Russian money has infiltrated U.S. private investment markets, but we don’t know exactly how much, where it is invested or who might be impacted by sanctions, due to a lack of transparency,” Ms. Bean said.