Toshiba could be forced to consider any private equity led buyout offer in the coming months as activist investors exert more control over the board following what one called a “game-changing” show of strength.

Three of Toshiba’s 20 largest investors told the Financial Times that they believed events in recent days, which included the resignation of the board chair, had given activists unprecedented levels of control over the composition of the company’s next board as it seeks candidates to fill five abruptly-vacated seats.

Although Toshiba has yet to receive any formal or binding buyout proposals from private equity or other strategic buyers, several of the world’s largest PE funds told the FT they would be interested if they could be sure of Japanese government approval — which views Toshiba’s nuclear and defence businesses as assets of national importance.

Several Toshiba investors said they believed there was a split within the Japanese government, with one faction open to the idea of allowing the business to be taken private.

The removal of Osamu Nagayama as chair of Toshiba’s board at last week’s annual general meeting followed a phase of intense turmoil at the industrial conglomerate centred on an independent report that showed collusion between the company and government to suppress activist shareholders.

Nagayama won just 43.7 per cent of support from shareholders, which took the view that while he had not been involved in the events described in the report, he had not been firm enough in its aftermath.

Nobuyuki Kobayashi, a board director named in the report, was ousted with record low support of 25 per cent and a third board member George Olcott resigned on Sunday. Ahead of the AGM, two board nominees were withdrawn in an effort by the company to calm investors’ outrage.

“I think that we have sent a clear message to the company that we will not vote for any board director that they suggest who the investors judge to be resistant to the idea of entering talks with a strategic buyer like PE,” said one investor whose firm holds a substantial stake in Toshiba.

“Nobody is going to want to be nominated to the board and then lose, which means Toshiba is effectively obliged to come up with names that it knows in advance are OK, which in this case means open to a deal,” the person added.

Toshiba said after the publication of the independent report that it would hold an extraordinary general meeting later in the year to submit its new set of board nominees. 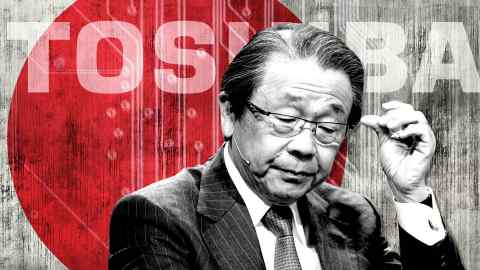 Shareholders have been calling on Toshiba to invite PE bids following a botched $20bn buyout attempt by CVC in April, which triggered divisions within the company that led to the ousting of then chief executive Nobuaki Kurumatani.

During last week’s AGM, the company said it would seriously study specific and feasible proposals to take the company private, but added that it had not received any such offer. Following the AGM, the board also said its soon-to-be-established strategic review committee would “engage with potential strategic and financial investors in the company or in its subsidiaries and various businesses”.

Other investors expressed scepticism about a credible PE buyout offer, saying few global funds would be willing to risk their reputation after the independent report illustrated the extent of the Japanese government’s interest in Toshiba’s future.

Rising confidence among Toshiba’s shareholders follows moves by its largest investor, the secretive Singapore-based fund Effissimo. The fund, which holds 9.9 per cent, called an extraordinary general meeting in March to demand the independent report after allegations first reported in the FT that Toshiba’s 2020 AGM had been conducted unfairly.