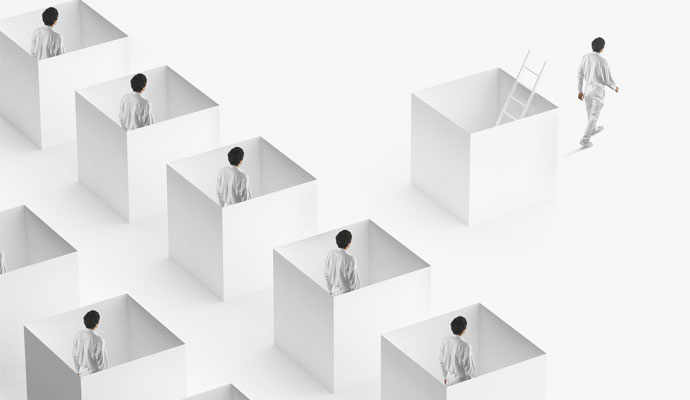 Picture a snow globe as the representation of office life. A century ago, it might have had a typewriter or a skyscraper amid the swirling flakes. There would have been a desk, or a filing cabinet. It wasn’t until the internet came about that these things were rendered all but obsolete. We really hadn’t taken stock of this development until the pandemic forced the knowledge worker home to work at kitchen tables and ironing boards in what turned out to be the biggest workplace experiment since the Industrial Revolution.

Today’s snow globe might contain a laptop or a smart phone, but beyond that, anything goes. The disruption of the past two years has proven that the nine-to-five physical office is out; it will be skills, not schedules and proximity, that determine who works from where, and this gives impetus to hiring across time zones and boundaries. Rather than making a daily commute, people will choose where they work—a new way of working that I call the Nowhere Office. Why nowhere? Partly because we are in a liminal space between one phase of work and another, and partly because nowhere is an anagram of “Here, now” and represents the collapse of old long-term planning. Nothing is certain, everything is moving fast. We are nowhere near where we ever were in working life and are unlikely to return to this place again.

Entirely new patterns of work are emerging. The details of hybrid work are still unclear and will continue to change, but it is already the new normal. Last year, in a survey for the Prudential Insurance Company of America of 2,000 people in the US who were working remotely, 87% of respondents said they intended to continue working at least one day a week from home after COVID-19 restrictions were lifted. Globally, the world’s workers wanted to work from home significantly more post-pandemic than they were allowed to before 2020. The expectation today is that 40 to 60% of working hours will soon be spent in employer or client offices, with the remainder spent working from home (WFH). Companies compelling workers to come back to the office full time are experiencing pushback: when Goldman Sachs—whose CEO, David Solomon, famously called WFH an “aberration”—tried to do it, only 50% of employees complied. How did we get to this moment, and what trends are coming next?

History happens slowly and then rushes up at us all at once. So it is with the evolution of the office. In 2020, while doing research for the British think tank Demos, I became interested in the shifts in office life that began emerging just after the Second World War. I chose this moment because it was the last time the world was united by a sense of reset, by the need to focus on rebuilding economically and socially after a global disruption. The organizational efforts supporting the D-Day Normandy landings were in a way a prototype example of a Nowhere Office: desks, filing cabinets, Hollerith machines, and punch card tabulators were set up on the windswept shores after beachheads were established, providing the back-office infrastructure for a vast military operation—a kind of pop-up office, in which what mattered was not the place but the people and the mission of those people. The Administrative History of the Operations of 21 Army Group on the Continent of Europe, 6 June 1944–8 May 1945, a book published by the British Army at the end of the war, noted drily that “considering the size and nature of the operation, the number of typewriters lost or damaged was surprisingly small.”

I call the period from 1945 to 1977 the Optimism Years, because in developed countries, work was infused with just that: there was a world to remake, global institutions to create, and capitalism to foster. This was followed by the Mezzanine Years, 1978 to 2006, a period bookended by the arrival of desktop computers and the birth of a fully digital society—and also one in which the notion of work–life balance began to be articulated. Then came the Co-Working Years, 2007 to 2020, during which the most immediately recognizable roots of today’s Nowhere Office were laid down: the internet and the smartphone made work fully mobile. Cultural shifts emerged as millennials and generation Z entered the workplace, bringing with them not just digitally native skills and expectations of freedom but also values around purpose that challenged the always-on, always-in culture in favor of mindfulness and meaning.

The shock of the sudden shutdown in March 2020 and the subsequent experiences and experiments should teach leaders and managers to take nothing for granted. You only have to look at the rapid shifts in the corporate real estate market to see the flux: London’s Canary Wharf Group, which owns the eponymous office development, has moved toward offering flexible office space, as has property giant Cushman & Wakefield’s 2021 collaboration with WeWork. Hybrid means planning for fewer workers going into offices less of the time. This is the moment for agile, arguably the most influential management concept of the last decade, to come into its own. Agility and iteration will be key.

What, then, are the priorities? Here are three key shifts to watch out for and adapt to over the next few unstable years.

How and why will matter more than where and when

The biggest shift is the attitude around presenteeism, which for too long has been taken to mean showing up for its own sake on someone else’s schedule rather than for a purposeful reason. There is now an understanding and acknowledgment that technology has redefined the relationship between the place of work and the time taken to get there. Instead of commuting for an average of an hour a day and bearing the brunt of inflation in the form of higher energy and gas prices, workers will find it far more attractive to go in when it matters and to stay put using teleconferencing when it doesn’t.

When people do gather physically, it can be in a coworking space or a hotel or at the company offices. What will matter will be two key things: the social interaction that takes place and the learning. Coming in to sit at a desk to do emails or exchange messages on Slack when you can do that anywhere will make far less sense in the Nowhere Office. Leaders who make their office space more like a university or private members’ club, where people can learn and gossip, will start to create a culture that is stronger than any bricks and mortar. It is interesting to note that in March 2022, financial services firm Citi appointed its first Global Head of Accountability, Culture and Talent Transformation, a new post-pandemic role highlighting the changing needs of office workers.

The Nowhere Office is a positive place where purpose and meaning will drive productivity, and where employees, shorn of the obligation to just show up, will no longer face what the social historian Studs Terkel memorably called “a Monday to Friday kind of dying” in his seminal book Working. This requires better management, but it also requires less management and more trust. Nicholas Bloom and his colleagues at Stanford University have shown that the agency, autonomy, and flexibility of working from home are producing productivity gains.

Your life stage at work and those of your coworkers will become far more central than anything else (even, perhaps, your choice of pronouns). I divide these life stages into three identities: the Learner, Leaver, and Leader. If you are a Learner, a young graduate, for instance, then being physically in an office may matter considerably in terms of both social capital and comfort: it’s harder to get work done at home if you share a space with others or have poor broadband. And the benefits of learning from others can often only come from the serendipitous snippets picked up in an office. “There’s a kind of birdsong in the office,” Kevin Ellis, Chairman of PWC UK, told me when I interviewed him for my book. “Birdsong” is a powerful way to describe the unique communication between humans—the exchange of knowledge, opinion, information, intelligence, and emotion—and it is impossible to fully capture or replicate digitally.

With up to half the US workforce predicted to be freelance by 2030, there is a new cohort I call Leavers, who will be dipping in and out of offices on contract. They don’t need a fixed, full-time place, just somewhere to gather from time to time, like finches at a feeder. And then there are the Leaders, who need to listen and learn more, and impose outdated algorithm-led monitoring and appraisal techniques less. Designing working patterns and places to suit the life stage of your workers will be key.

Social health is the new well-being

A lot of emphasis was placed on well-being pre-pandemic. But now we can see that part of the reluctance to return to the office was that the world of work itself was not well. In fact, before the pandemic, the World Health Organization called stress the health epidemic of the 21st century and estimated it was costing US businesses US$300 billion a year in lost productivity.

Health is, as we know, both physical and mental. But it is also social. I define social health as the connected state of an organization and its workforce, principally the flows of knowledge through networks. In my view, networking needs to be both encouraged and taught as part of a social health strategy that builds confidence and social capital as well as the physical and mental health that any decent company promotes as a matter of course.

The healthier the networks—cutting across age, race, and experience—the stronger the performance and social cohesion. People are social beings. Investing time and effort in diversity can also bring dividends: almost a decade ago, researchers Sylvia Ann Hewlett, Melinda Marshall, and Laura Sherbin, writing in the Harvard Business Review, showed that businesses could see up to 45% growth in market share resulting directly from having a diverse team.

The healthier the networks—cutting across age, race, and experience—the stronger the performance and social cohesion. People are social beings.

However, social health also hinges on time, and people want agency and choice over how they spend it. This is one of the major reasons for the pushback against return-to-office (RTO) policies. The UK-based global luxury brand Fortnum & Mason found that creating a program called Wellbeing Wednesday—which carves out several hours with no meetings or obligations to the business in the middle of the week—promoted trust and engagement. “By providing some dedicated time to our teams where there were no competing priorities from work, we found our people took the time to do something little to recharge their batteries—getting some fresh air, baking a cake, doing some yoga—and we shared these in our weekly newsfeed to inspire others,” Tom Athron, Fortnum & Mason’s CEO, told me. “Of all the investments we made in our people through the pandemic, this was by far the simplest and most popular, and we’ve now made it a permanent feature of life at Fortnum’s.”

Control of time, control of relationships and networks, and good communications: this is social health. In the Nowhere Office, this is going to matter more than the visual trappings of well-being, which proliferated pre-pandemic: those beanbags and sleeping pods, for example.

These are some of the shifts that have moved the office from being somewhere fixed but full of discontented employees stuck in an old model to being a fresh and new place that is as metaphorical as it is physical. Nowhere, it turns out, could be a good, productive, and profitable place to work.