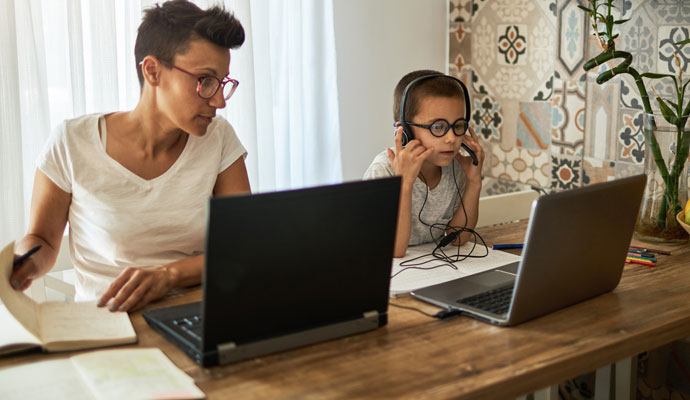 The surge of the COVID-19 Delta variant, driven overwhelmingly by unvaccinated people, is causing all sorts of problems for businesses that were hoping to return to pre-pandemic operations this fall. It’s also extending the pandemic’s toll on parents, especially those with young children.

Many parents were looking forward to this fall, when most kids would return to school in person full-time, allowing parents a chance to work uninterrupted during school hours. Then came the surges. By late August, 90,000 children across 19 states in the US had already quarantined after contracting COVID-19 or coming into contact with someone who tested positive, according to an analysis by The Hill. And that was before all schools had opened for the year. Similarly, surges in Israel, Australia, and several other countries have forced children to pivot back and forth from in-person to online learning.

When young kids are home, a parent has to be, too. And unfortunately, this problem won’t end with COVID-19. There will be more pandemics and other disasters in the future. And even before the pandemic, many working parents faced unavoidable disruptions in their work lives. Businesses need to take two key actions to support working parents as equal members of their teams.

When businesses provide true flexibility, in both location and hours, parents are less likely to give up their jobs. Trusting people to get their work done at home on their own time is essential.

Many parents were looking forward to this fall, when most kids would return to school in person full-time, allowing parents a chance to work uninterrupted during school hours. Then came the surges.

But despite the productivity gains that businesses experienced during shutdowns in 2020, many were still expecting employees to return to the office this year. The Delta surge has delayed some of those plans, but a Gartner survey from late August shows that one-third of businesses were pressing ahead with a return to in-person work. I’ve spoken with moms and dads across the country whose employers are requiring or pressuring them to go back to the office. Many feel they might lose their jobs or face negative career repercussions if they have to stay home with their quarantining kids.

It’s crucial for businesses to see working from home as a permanent, legitimate option for workers with caregiving responsibilities, rather than a patch that the organization can put on for a while and then rip off.

Part of many managers’ discomfort with remote work is that they are unsure how to gauge their off-site employees’ performance and productivity. Some business leaders equate face time with productivity. I’ll never forget a visit I had to a Silicon Valley startup in which the manager showing me around described a colleague this way: “He’s such a great worker. He’s here every night until 10, and back in early every morning!” In my work helping businesses update their policies and cultures to accommodate caregivers, I often have to rid managers of this old notion. There’s nothing impressive, or even good, about being in the office so much.

To help change the paradigm, I work with managers to find new ways of measuring an individual’s performance and productivity. Instead of focusing on hours worked per day, we look at an employee’s achievements across a broader time metric, such as a month or quarter. We ask, what did the employee do for the company during that time?

It’s often then that businesses realize how little overlap there is between those who are seen working the most and those who have the greatest impact on the company. Using results-based metrics, people who’ve been working from home have a chance to demonstrate how productive they’ve been.

Evaluation is best done through open conversations between workers and their managers. Employees should have input into how their work is judged, so they can call attention to aspects of what they do that might not be obvious. For example, I think back to my days reporting for NPR. Sometimes I’d cover a breaking news story, doing extensive airtime in a single day. Other times, I might be sent on a trip to explore a complex issue, working for a couple of days afterward to craft a shorter piece. Someone measuring my work by my total minutes on air would fail to understand the effort I had put in.

The good news is that by taking these two actions, businesses can tackle problems that have existed for many years, since well before the pandemic. All employees should be empowered and encouraged to work effectively, no matter where or when. Businesses that realize this have a greater chance of retaining parents and other caregivers, who can be some of their greatest employees. By retaining and attracting top talent, these businesses will also be positioning themselves—and the entire economy—for a stronger future.