Zooplus, the German online pet supplies retailer, has agreed a €3bn takeover by US investor Hellman & Friedman in the latest move by a private equity group to cash in on fast-growing animal care spending by pet-loving consumers.

The €390 per share in cash offer to take the company private is a 40 per cent premium to its undisturbed share price. Following the announcement on Friday, Zooplus stock rose more than 40 per cent to above €394.

The deal comes after sales at Zooplus, one of Europe’s largest online petcare retailers, hit €1.8bn last year, up 18 per cent from 2019, propelled by a jump in pet ownership across Europe during the pandemic as lockdowns kept workers at home. Its shares are up almost 300 per cent since March last year.

Private equity firms have piled into petcare in recent years, seeking to take advantage of customers’ willingness to spend larger sums on their animals, from premium foods to fashion accessories. Worldwide, spending on petcare rose 8.7 per cent in 2020 as lockdowns helped fuel a boom in pet ownership, according to Euromonitor International.

Swedish group EQT in 2016 acquired IVC Evidensia, which has snapped up hundreds of independent vet practices, and BC Partners bought US groups PetSmart in 2015 and Chewy in 2017. It listed Chewy in New York in 2019.

The Zooplus management and supervisory boards said in a statement that they supported and recommended Hellman & Friedman’s offer. 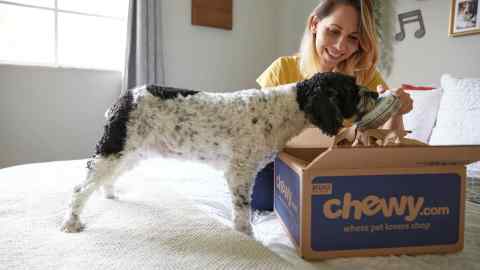 According to Zooplus, the European pet supplies market is expected to rise from €29bn in 2020 to roughly €49bn by 2030. It said that as a pure-play digital retailer, it was “well positioned to benefit from . . . a continued shift to online” as well as “the premiumisation of pet food and supplies”.

Zooplus has targeted taking a 10 per cent share of the online petcare market by 2025. Internet sales account for roughly 17 per cent of the sector’s overall revenues, a proportion that is expected to grow significantly.

Hellman & Friedman has more than $80bn in assets under management and committed capital, with holdings in European online car retailer AutoScout24 and AxelSpringer. It recently completed acquisitions of European medical equipment specialist Cordis and US home furnishings chain At Home.

The group said the deal would mean Zooplus would be able to “materially accelerate its pace of investment” in order to “adapt to an increasingly competitive market landscape”.

The deal is subject to a minimum acceptance threshold of 50 per cent plus one share. Hellman & Friedman has signed irrevocable tender commitments for roughly 17 per cent of Zooplus’ share capital, it said.

Private equity groups, fuelled by record-sized funds, have this year had their busiest period for acquisitions since records began in 1980. They struck 6,928 deals in the first six months of 2021, figures from Refinitiv show.