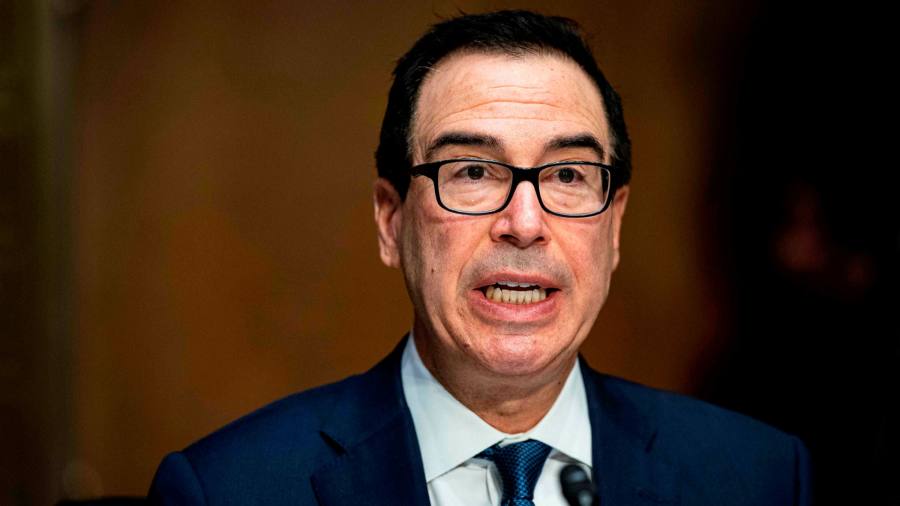 Sign up to myFT Daily Digest to be the first to know about Steven Mnuchin news.

Mnuchin launched Liberty Strategic Capital earlier this year after serving four years in the Trump administration. The fund is intended to focus on financial services and technology.

In a statement to the Financial Times, SoftBank confirmed it had invested in Mnuchin’s private equity firm through its second Vision Fund.

One person close to the situation said the group’s decision to invest was influenced by Saudi Arabia’s PIF, the state fund administered by Crown Prince Mohammed bin Salman, which encouraged SoftBank to back Mnuchin.

It was unclear exactly how much SoftBank contributed to the fund. Bloomberg, which first reported the Mnuchin fundraising this week, said most of the backing came from Middle Eastern investors including the PIF.

Liberty Strategic said: “The firm is not permitted to comment on any ongoing fundraising, but it has a diverse investor base including US insurance companies, family offices, sovereign wealth funds, and other institutional investors.”

During his time as Treasury secretary, Mnuchin nurtured close ties with a number of Gulf countries. His last foreign trip in office, around the time of the January 6 attacks on the US Capitol, involved stops in Saudi Arabia, Qatar, the UAE and Kuwait.

The PIF and SoftBank have close ties. The Saudi Arabian fund contributed $45bn to the Japanese group’s first Vision Fund, making it the largest backer of the $100bn technology investment vehicle and landing Yasir al-Rumayyan, who runs the PIF, a seat on SoftBank’s board from 2017 until late last year. Abu Dhabi’s Mubadala also put $15bn in the first Vision Fund.

SoftBank, which is run by the billionaire dealmaker Masayoshi Son, has been unable to attract external capital for its second Vision Fund and is relying on internal funds for its investments.

Liberty Strategic made its first investment in July, leading a $275m fundraising by cyber security start-up Cybereason. The Israel-based company, which is also backed by SoftBank’s second Vision Fund, said it would use the proceeds to fund its “hypergrowth” strategy and eventually seek a public listing.

In interviews discussing the Cybereason investment, Mnuchin has said he was influenced by his tenure as Treasury secretary, when he was responsible for protecting the financial services industry against cyber attacks.

Prior to joining Donald Trump’s campaign in 2016, Mnuchin was a familiar face on Wall Street.

Jack Lew, Obama’s second Treasury secretary, is a managing partner at Lindsay Goldberg, and Hank Paulson, who also served under Bush, is executive chair of a climate investment fund at TPG.